NEWPORT, R.I. – Problem: We need to publicize our historic site so more visitors will come.
Solution: Ask a TV channel to make a show about our site.

This September, JBS, the Jewish Broadcasting Service, aired “The Touro Synagogue.” The show will feature the oldest standing synagogue in the U.S., Touro Synagogue, completed here in 1763.

Getting from problem to solution began with brainstorming by the board of the synagogue’s Touro Foundation. A couple of members who knew Rabbi Golub offered to approach him about featuring the synagogue on JBS, which is dedicated to Jewish topics and has a tremendous reach. Rabbi Golub agreed.

“It is important to tell the story of the significance of Touro Synagogue to JBS viewers who may know little about it,” Rabbi Golub said. 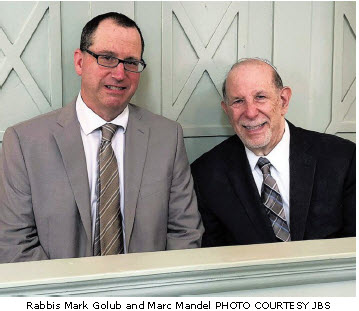 “When I met Rabbi Golub at Touro Synagogue,” Rabbi Mandel said, “I said, ‘Welcome home. You have been part of my family for a long time.’  “He was very touched by this encounter,” he continued.  “It was really a special moment for the two of us.”

“I have always had a connection to Rabbi Mark Golub and his media platforms,” Rabbi Mandel said. “My children and I used to watch Shalom TV together. They loved the jingle, ‘You’re watching Shalom TV.’ It was an opportunity for us to watch something with Jewish content together.

“My son Carmi was proud that there was Jewish programming on TV,” he continued. “JBS made it possible for me to learn Torah with my children, something that doesn’t always come easy for a rabbi and his children.”

Rabbi Golub has been involved in media since college.  While an editorial director for New York’s radio station WMCA, he was assistant editor of the Reform journal of ideas, Shma, and worked for a Havurah in Stamford, Conn. In 1979, he created a weekly Jewish radio program, L’Chayim, which is currently on JBS.

In 1991, with Michael Pravin, z”l, Rabbi Golub founded RTN (Russian Television Network) for Russian immigrants to the U.S. While a secular station, most of RTN viewers are Jewish.

Rabbi Golub was impressed with his visit to Newport. “Our entire crew all had a feeling of awe, being in such a historic Jewish site as the Touro Synagogue,” he said. “It was one of the most enjoyable and important afternoons
I have ever spent doing a program for JBS.”