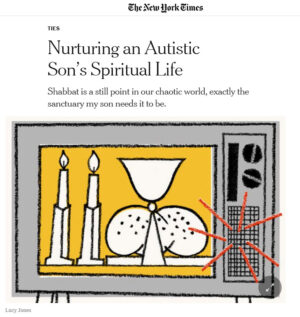 One Friday night several months ago, my younger son, Mickey, was flipping channels in search of his favorite station, the Game Show Network, when suddenly I heard familiar sweet singing.

“Mom! Look!” he called. He thrummed with excitement. “Rabbi Angela! That’s my rabbi!”

He had happened upon the Jewish Broadcasting Service, and they were live streaming Shabbat services from Central Synagogue in Manhattan. Angela Buchdahl, who is now the senior rabbi there, officiated at Mickey’s bar mitzvah 14 years ago. But to say “officiate” is to sell short the extraordinary work she did with him.

Mickey has autism and epilepsy. At the age of 18 months he knew only three words. Specialists told us he was developmentally disabled, and that we shouldn’t expect higher education for him. That diagnosis was the earthquake at the center of our lives, propelling us into the world of early intervention, endless therapies and special education services.

Mickey was 2 when we joined our local temple in Westchester County. No one like him had ever had a bar mitzvah there. Angela, who was then our temple’s assistant rabbi and cantor — the first woman ever to be ordained as both — made his bar mitzvah possible. Mickey doesn’t read Hebrew. But he loves music, and has a terrific memory. Angela recorded herself singing all the blessings and prayers. Mickey played the CD over and over for months. At bedtime, the crystalline purity of Angela’s voice lulled him to sleep.

From the team at NYT Parenting: Get the latest news and guidance for parents. We’ll celebrate the little parenting moments that mean a lot — and share stories that matter to families.

The day of his bar mitzvah he sang every song in Hebrew. He helped Angela lead the service, and read a brief speech they’d written together. At the conclusion, Angela sang L’chi Lach, “Let us go forward,” a song based on God’s charge to Abraham to seek his destiny. It ends with the refrain, “And you shall be a blessing,” and Angela said, “Mickey Carter, you are a blessing, to everyone in this room.” Mickey beamed. “Thanks! You too!” he said, and the room erupted in applause. Mickey is 27 now, and he still listens to the CD she gave him.

He often has a hard time sitting still for movies or sporting events, but that night he watched the entire service. When it was done, he searched YouTube for videos from Central Synagogue, and watched them all week. The following Friday night, he waited expectantly in front of the TV. Once more, he watched the hourlong service. I was awed. “He must really love it,” I said to my husband, Marc.

I loved Shabbat too when I was a child. Sometimes, just before dusk on Friday, my dad would take my brother and me to my grandfather’s house. Several of my uncles usually joined us. Grandpa served warm potato chips he’d crisped up on a cookie sheet in the oven, slices of Swiss cheese, Dixie cups of ginger ale for the kids, and glasses of schnapps for the grown-ups.

While they chatted around the kitchen table, I caught up with the Sunday comics, the newspaper section Grandpa always saved for me. Uncle Jack, who made a religion of buying in bulk, whether it was industrial size cartons of Kleenex or folding chairs to seat 50, supplied everyone with loaves of challah. It was my favorite food, and every Friday night throughout my childhood, Dad never failed to bring home a loaf of crusty, honey-scented challah dotted with poppy seeds. Mom would light Shabbat candles, and after dinner, we’d go to services. I was an anxious child, but I was soothed by the familiarity and warmth of those weekly rituals. I felt protected, and knew with certainty I was loved.

I tried to recreate that sense of home as safe harbor for my own two children. But after Mickey’s diagnosis, I had struggled to maintain an ordinary family life while meeting the extraordinary needs of my autistic child. It had been a long time since I lit candles, or made much fuss for Shabbat. But the following week I bought a challah, took out candlesticks, and an antique Kiddush cup that had been passed down through Marc’s family. I found a box of Shabbat candles that had languished so long in a kitchen cabinet that the candles had fused into a waxy mass. I pried a pair apart. Mickey set up the “congregation”: an array of plush Muppet toys along the couch. Cookie Monster. Abby Cadabby. Count von Count. Kermit the Frog. Two-Headed Monster. Grover. Elmo. Ernie. Bert.

These toys still comfort and delight him, so we go with the flow. Long ago we consulted a famous expert on child development, who told us it was critical we respect Mickey’s interests. “Those passions are the window to your son’s emotional life,” he said.

“I’m watching Shabbat with my friends,” Mickey told me.

Watching services from Central Synagogue has become our new tradition. All week long, he’ll ask, “What are we doing Friday night?” Each time, he arranges his Muppets before turning on the broadcast. Last week he lifted up one toy after the other and told me, “They’re rising and sitting. I’m helping them. Also, I’m putting on my bow tie.”

I find myself humming along happily to a lively rendition of Lecha Dodi — “Come, my beloved,” a mystical Hebrew hymn sung at sunset to welcome the Sabbath. When the broadcast ends, we light candles. Marc lifts the Kiddush cup, I slice the challah. Mickey recites the three Hebrew blessings over the candles, the wine and the challah all by himself. Each time, I think of his first speech therapist all those years ago, who gently suggested I prepare myself for the possibility my child might never speak at all.

I don’t know what compels Mickey to watch services week after week. Initially I thought it was the pleasure of seeing Rabbi Angela. But even when she is not officiating, he watches just as eagerly. Is it simply the familiar music he loves? Rituals and routines are reassuring, but is it also a yearning to connect? To what? Would I ask this if he weren’t autistic?

Maybe my questions say more about my needs than his. Do we ever really know what religious observance means to anyone else? Worship is communal, but at heart it’s also intensely private. Our family’s life has frequently been fraught with fear and worry, and Shabbat gives me respite. It’s a still point in our chaotic world, and its sanctity and sweetness bring me home to myself.

Mickey’s inner life remains mysterious to me. I suspect it always will. But in the flickering light of the television screen his face is incandescent. His joy is unmistakable, and Shabbat is exactly the sanctuary he needs it to be.

Liane Kupferberg Carter is a New York-based essayist and author of the memoir “Ketchup Is My Favorite Vegetable: A Family Grows Up With Autism.”